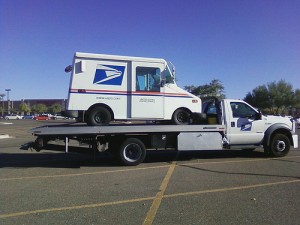 Yesterday I woke up and read the news that the New York Times is saying that the United States Postal Service is going to go under if the government does not step in and do something.  When will this stop?

So let me get this straight, the government is having a hard time running a service oriented company.  Yes, I said company.  The first step in fixing the United States Postal Service is to STOP running it like a government entity!  With all due respect to Mr. Donahoe, it may be time to start thinking a little more outside the box, and I don’t mean the Postal Box I keep seeing commercials for every ten minutes.

1.   Start acting like a real company:  Play by the same rules all other companies do.  You are either run well and you make money or you are run poorly and you lose money.  If you are being run poorly and losing money then start making tough changes and reducing cost immediately.

2.   Quit relying on big brother to always bail you out:  Run the United States Postal Service like a real company.  Mr. Donahoe, if you are running it and it does not do well, you go bye bye.  Your Board Steps in and hands you your ticket home, and they most likely send all the people you brought into the company who are ineffective home as well.  You do well, you get paid well.  You do not do well; you get fired like the rest of the normal people in this country.

3.   Cut cost immediately:  Determine what is profitable and what is not, then start cutting cist.  If it means people losing jobs then it may be time to see how interested the Union is in keeping their people employed which leads to point

4.   The Jobs go or the terms of employment are drastically re-negotiated with the union no questions: If the normal competitive company in this market is paying workers $12.00 to $20.00 and the Postal Service is paying $15.00 to 23.00, well no wonder the numbers don’t work.  No wonder they are not a viable company.  Time to get the employees in line with the standard competitive environment.  I do not want to see people lose jobs, but it always amazes me that Union workers are surprised to see a company go under when they know they are being paid 20% to 40% higher than the market will allow for employment in a competitive business environment.  If you are business smart and want a huge laugh, look at the contract that was agreed to with the Union (it includes a no-layoff provision.  It provides  3.5% raise for APWU members over the period of the contract, along with seven upcapped cost-of-living increases).

5.   Stop hiring people from within the Postal Service to run it!  Mr. Donaho is a 35 year veteran of the United States Postal Service.  Was this supposed to impress me or scare the heck out of me?  Great, so we hired someone from within.  Let me make sure I am clear on this.  Mr. Donahoe was hired to help fix the Postal Service which lost $8.5 million in 2010 according to his bio.  It has long been a very ineffective organzation from certain stand points.  It is failing, so why do we keep hiring people who have aided in it failing?  Mr. Donahoe has been a part of the problem for a long time.  He has been with the Postal Service for 35 years.  You think his thinking might be a little jaded with the old “This is how we have always done it”?  No More Hiring from Within to Run The Postal Service!  There are way too many qualified people who could come in and run this from the outside.

6.   Bag the Post Master General Title:  I know in recent years they are called the Post Master general/CEO.   The next person they hire should be told, you are a CEO nothing more nothing less.  You are to run this like a real company.  If things go well you get paid.  If things don’t, you will be promptly and publically fired.  Are we all clear on how this should work?

7.   Time to off load the unwilling:  Hello to everyone that works for the Postal Service.  The bus is leaving, and you are either on it or you are going to be left right where you are standing.  The employees need to know this is a time for new level of commitment, monitored work effort, results driven productivity, and those who work hard and do their jobs get ahead, and there are a lot of these people who bust their butt every day at the Postal Service.  Then rest who do not understamd what effective, focussed, hard work is should be shown the door!  Welcome to corporate America.  Welcome to the reality most workers face every day in this country.  Time to let people know their is a new sherif in town, and the old status quoe is no longer acceptable.  Get these people fired up.  Reward the people who work hard, and Let them share in the success and the profits of the turnaround!

8.      Time to restructure our service and pricing:  I know none of you wants me to tip the people off at the Postal Service about this, but how many people would pay a monthly fee to keep their service and to continue to get their mail?  I know I would at my house and for my companies.  Did you know the United States Postal Service has 142 million delivery points.  Let’s say for our sake here that half of those would pay a monthly fee to keep getting their mail.  Now let’s bill them $4.95 a month.  Why $4.95 because it is about a fourth of what most people pay for cable monthly.  It is about 12% of what they pay for their cell phone monthly,a nd it is reasonable.  It is an amount most people could pay to have their importnat items delivered to them.  This would generate approximately $351,450,000.00 a month.  This would be in addition to the same old charges for stamps as well.  So you pay the $4.95 a month for delivery as well as for stamps.  Maybe if all goes well stamp prices could actually go down based on the new revenue generated via monthly delivery charges.  (these numbers may be off of course, I am trying to establish the fact that the Postal Service is leaving a ton of money on the table by not charging for delivery as they should.  Co cut the numbers by 50% again, it is still a lot of money)

9.   Automate all billing and payments as much as possible:  That’s right set up automated payments for people to pay on a regular basis just like any other company would.  Make sure that delivery service is paid for on a timely basis.

10.   New United States Postal Service Model:  You either pay for the delivery service on a monthly basis or you do not.  For those people who choose not to pay for/utilize the Postal Services delivery services, they will have a few options.  They can pay from $0.75 cents to $1.25 for each letter/magazine for one time deliveries to them.   Customers do not have to pay monthly, but if you don’t, then you will pay a higher amount to use our services when the time comes.  Wait, you mean I have to pay for both deliveries and sending?  You better believe it.  This isn’t your grandfathers postal company anymore!

In the New York Time Article is said “In recent weeks, Mr. Donahoe has been pushing a series of painful cost-cutting measures to erase the agency’s deficit, which will reach $9.2 billion this fiscal year. They include eliminating Saturday mail delivery, closing up to 3,700 postal locations and laying off 120,000 workers — nearly one-fifth of the agency’s work force — despite a no-layoffs clause in the unions’ contracts.”   Mr. Donahoe is in a bind.  Working at the United States Postal Service right now is like rearranging the deck chairs on the Titanic.

It is time to change the model. It is time to start running the Unites States Postal Service like a successful company.  This means that our Government needs to stop giving hand outs to keep things running status quo.  The ideas here would need tweaking to get completely right, but they are a step in the right direction.   I can think of a dozen people right now that could be named the CEO of the Postal Service and if given the ability to do things right would turn it profitable within three years.  Times are tough, and times are changing.  It is time someone really change the United States Postal Service.